PIGS IN SPAAAACE! : Ham Dare, Pig of The Future 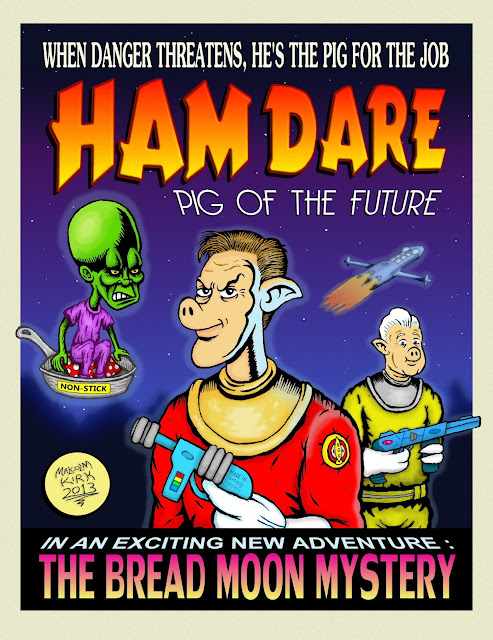 I've been drawing Oink! characters again. You can see my previous 'fan art' here and here.
Ham Dare was created by Lew Stringer, (who wrote it), and the late Malcolm Douglas, (aka J.T. Dogg), who drew it.
Ham was obviously a parody of classic British science fiction comics character, Dan Dare, (created by Frank Hampson), who originally appeared in the 1950s Eagle comic, and has had numerous reboots and reworkings over the years, including a computer animated television series a few years ago. In my view, Ham Dare was truer in spirit, (and appearance), to the original than most of those re-imaginings.
The 'Bread Moon Mystery' is not a genuine Ham Dare story but a play on the title of the Dan Dare serial 'The Red Moon Mystery'.  It's not a very good pun, but it did lead to a plot forming in my mind while working on the picture. A story involving a butcher, a baker and a full English breakfast. One day I might just draw the thing for real.