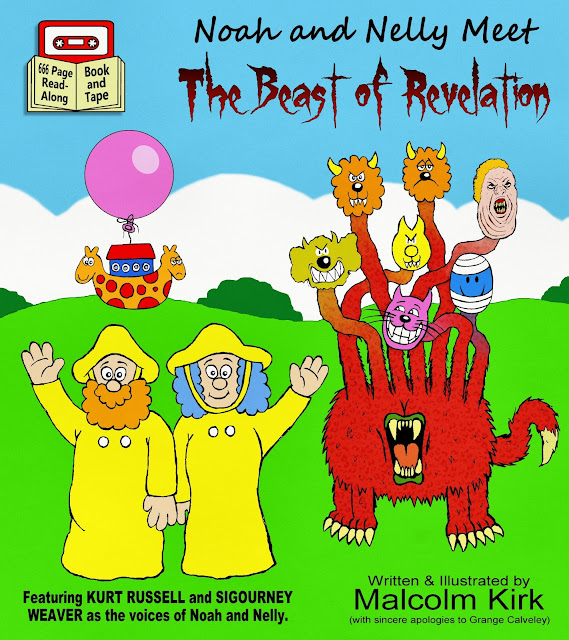 I hope this doesn't mean I'm going to Hell. Certainly wouldn't be the first time one of my drawings has got me into a spot of bother.

This was drawn for last week's Weekly Themed Art Blog, for which the theme was 'Scenes From The Bible'. It was the only entry, the Bible clearly not as popular as it used to be.

Noah and Nelly were created by Grange Calveley, who also created Roobarb, (based on his real-life tree-climbing pet dog), and appeared in the children's cartoon series 'Noah and Nelly in... SkylArk' way back in 1976. It hasn't appeared on British TV since 1980.  The series featured 'Nutty' Noah and his wife, 'Knitty Nelly', (who knitted), going on adventures in their all terrain vehicle, 'The SkylArk' with a crew of talking two-headed animals. Needless to say, it deviated somewhat from the Bible story which inspired it, and was a bit odd. You used to be able to get bars of chocolate with various wrappers depicting the animal characters such as 'Brian the lions'.

Like Roobarb, it was animated by Bob Godfrey, which is why Henry's Cat is also one of the heads of the beasty in my picture. The humanoid head is from John Carpenter's The Thing, due to obvious parallels with the film and that's also why Noah is voiced by Kurt Russell in my version, (the cartoon was narrated by Richard Briers and Peter Hawkins).  Well, they seem obvious to me, anyway.  If you don't know why Mr. Bump's on the end of one of the necks, Google a description of the beasts of Revelation and that should explain it for you. 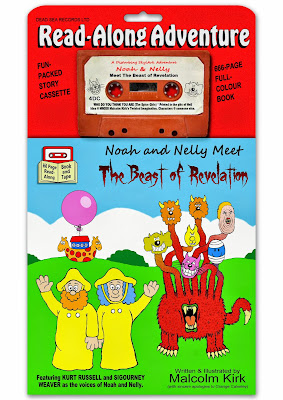