Those were just some of the lyrics on a free flexi-disc single that graced the cover of the first issue of a new British children's comic in 1986.

"Oink!" was its name, and in spite of what almost everyone everywhere says, it was not a junior version of Viz. It was actually modelled on Mad magazine (not sure where I obtained this information from, but it was probably from an authoritative source and certainly makes a lot of sense).

Done that? Good. You'll have read all about the important stuff like how an embryonic Charlie Brooker was involved and how it was very controversial and stuff, (just ignore that bit where they compare it to Viz).


Anyhue... I recently acquired a number of issues of Oink! My brother's been building up a collection via ebay and he sold me some of his doubles. Looking through them all prompted me to have a go at drawing my takes on some of the characters. So that's what this blog post is all about. 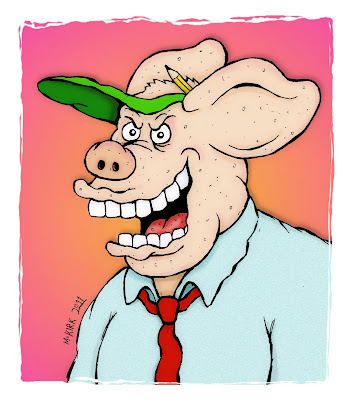 Next, Burp The Smelly Alien... 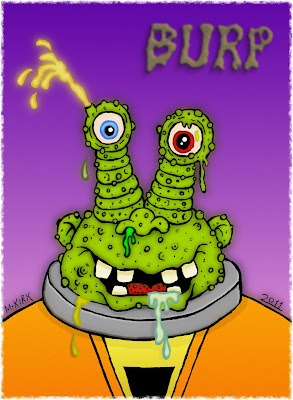 Burp was the creation of Banx. You can see some examples of the strip on his website here... http://www.jbanx.com/strips/burp/

There's apparently also an animated version in development. Check this out... 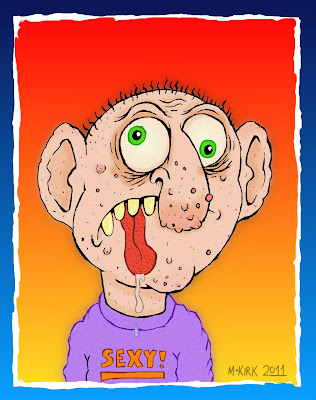 Horace was originally drawn by Tony Husband whose website is here... http://www.tonyhusband.co.uk/ ...and has some interesting Oink-related stuff on it.

Might do some more Oinky drawings and stick them in a future blog thingy, but that's yir lot for now.
Posted by Malcolm Kirk at 01:26