Zombo For The ZX Spectrum 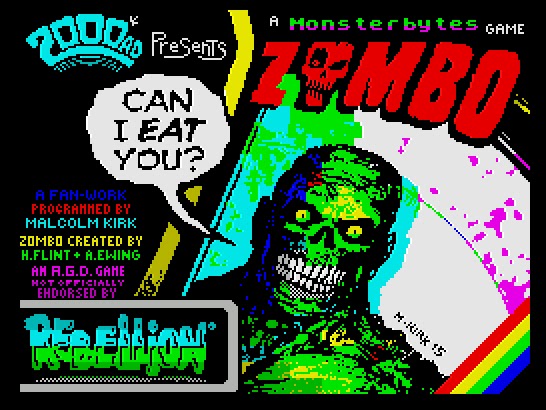 Not a dream! Not an imaginary thing like what someone does for a joke or something! This is the real thing - an actual thing that you can download right now, right here. 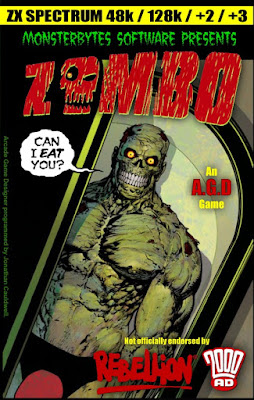 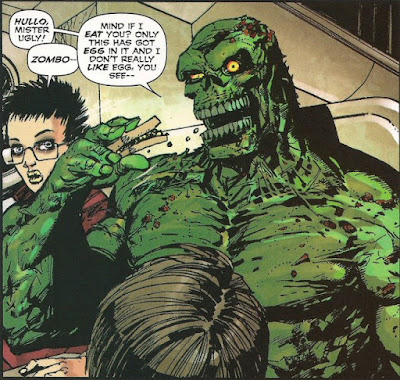 When Flight 303 crash-lands on the proto-sentient and highly lethal deathworld known as Chronos, it does not bode well for the surviving passengers. Only one well-mannered zombie/man hybrid can save the day. He is Zombo, the result of a top secret Government™ experiment to create the ultimate soldier or weapon or something. Trust your Government™. 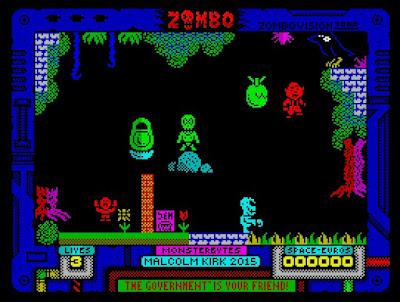 You must rescue 6 survivors and defeat the secret end of game baddy to win. Colour coded keys are scattered around the planet, as are several other items, some of which may help, others of which may not, but there's a gun somewhere which'll probably come in handy. However, please bear in mind that the Shootybang 2000™ can only fire horizontally. To fire vertically, you'd require an upgrade to the Shootybang 3000™ and that's not available to you within this game.

WHY HAVE YOU MADE A ZX SPECTRUM GAME ABOUT ZOMBO?

Because the plot of the 2000 AD comic strip is exactly the sort of bizarre premise that a lot of those old 8-bit games used to have, and I knew there was software available that meant that I could if I wanted to, (in this case, Arcade Game Designer by Jonathan Cauldwell). Add to that the strangely British sensibilities and twistedly nostalgic pop culture references, and a slightly buggy game for the Spectrum just seemed a perfect tie-in.

Zip file includes the instructions above, tzx, tap, z80 and sna files, and a mock cassette inlay. You'll need a Spectrum emulator to play, but you should have no trouble finding one of those online.

Incidentally other, older, official spectrum games based on 2000ad properties are available from HERE and  a recently rediscovered Judge Dredd game by Virgin games is available HERE.