When Eric eats a banana...

I'm pretty certain I read the Nutty comic from the very first issue, (circa 1980 - I'd be five),  and it was the first comic I got on a regular basis. Every Sunday, the 'paper man' came round delivering periodicals and selling confectionery out of his car. My brother's comic of choice was Buster, which, on balance, was probably the better publication but my choice, the Nutty, had something Buster did not... 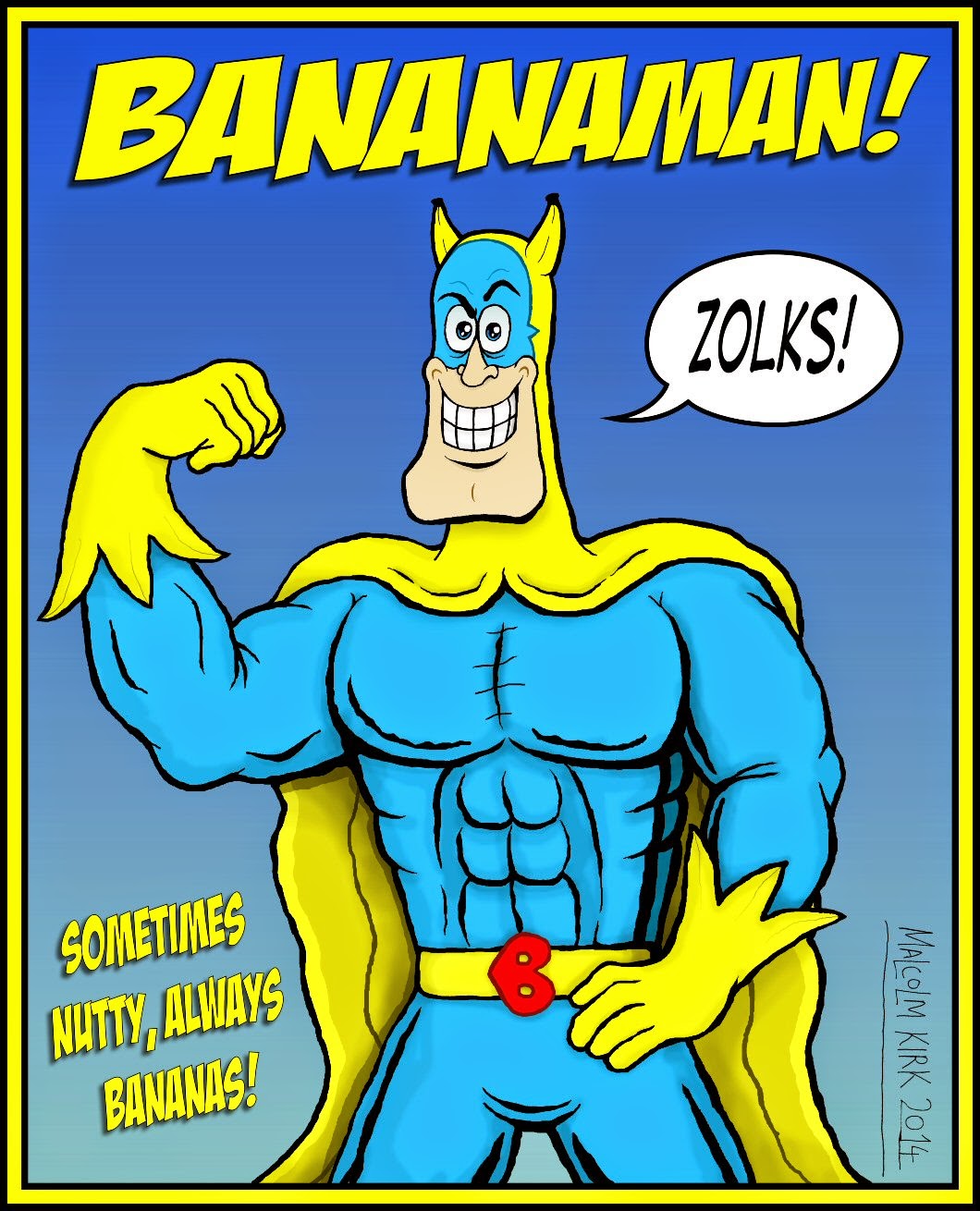 Bananaman : Has the strength of twenty big men.

Bananaman was unarguably the best thing within its pages and obviously popular, because the strip soon went from a single colour page on the back cover, to two pages taking up both covers, and eventually, to three pages taking up the front cover and the centre spread. Three page long weekly humour strips were pretty much unheard of back then.

The tone of Steve Bright's scripts combined with the late John Geering's artwork left a pretty hefty impression on me and inevitably bled into my own early attempts to create comics. In fact, Bananaman was probably more of an influence on my drawing style and reading habits than anything else since. If not for Bananaman you might not even be reading this blog right now because I might not have got into all this stuff.

Over time, I began noticing a few subtle, (and not so subtle), alterations being made to the strip. For instance, Bananaman's costume originally looked something more like this... 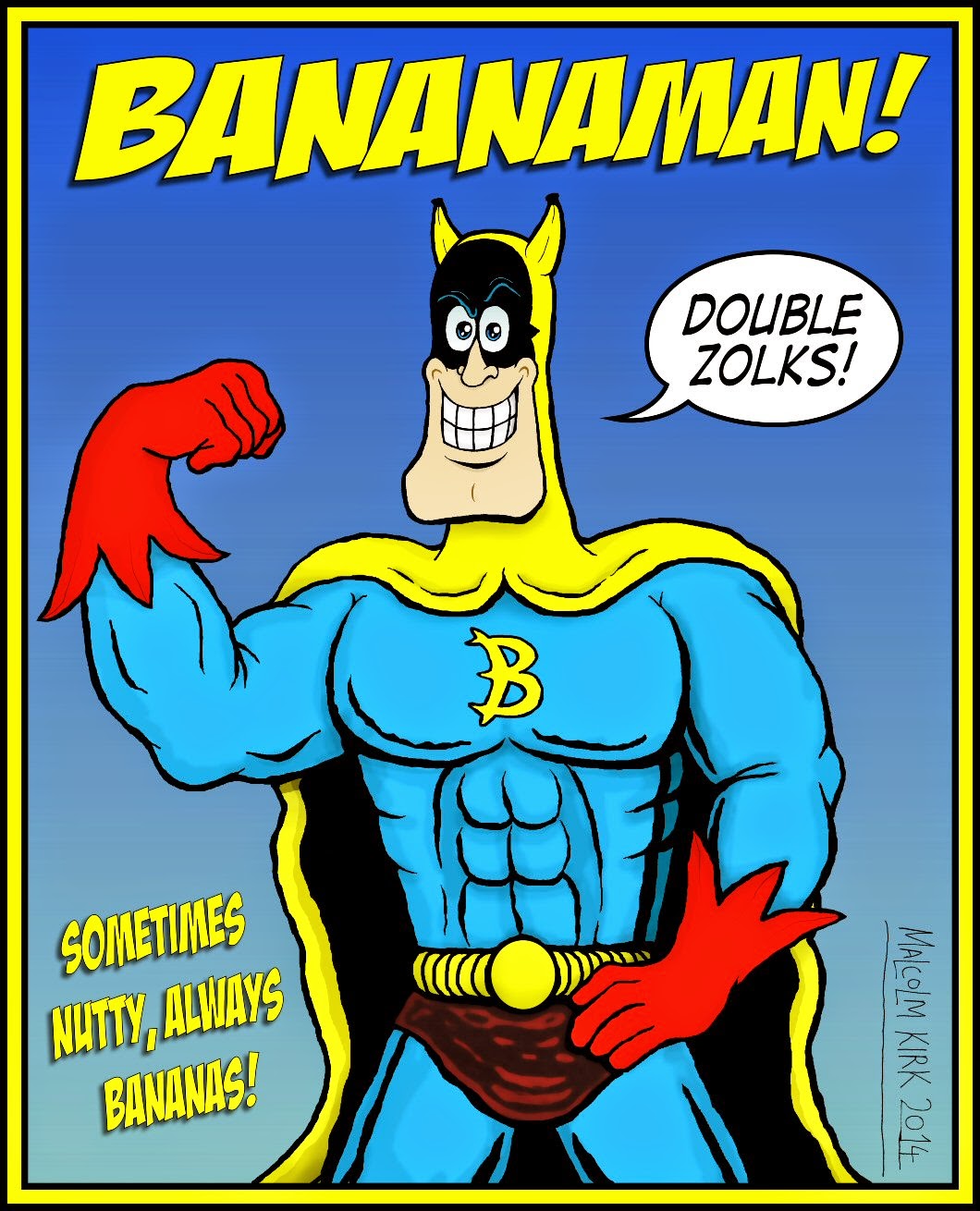 That wasn't the only change. He picked up a sidekick in the form of Crow, (obviously a terrible pun on Robin, but he was at least an actual, literal crow), the headdress wearing chief of police was replaced by stereotypical Irishman, Chief O' Reilly, and young Eric, (Bananaman's alter-ego),  got a less severe hairstyle than the skinhead do he'd originally been depicted with.

Then, in 1983, the reason for all the changes became apparent when this showed up...


There was a lot of things to like about the cartoon. That theme tune, the Goodies doing the voices, but it just wasn't anywhere near as good as the original comic strip, not as irreverent. Case in point, you wouldn't get anything quite like this going on in the cartoon... 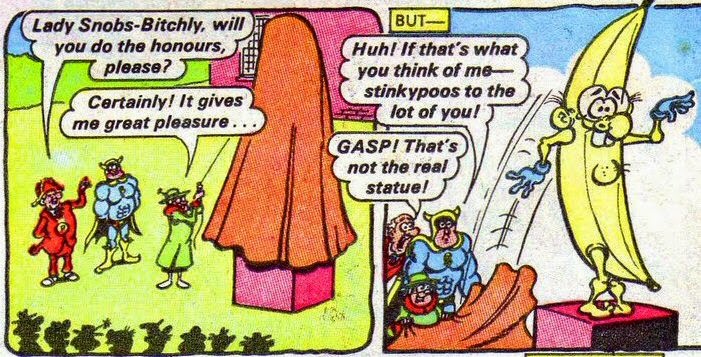 No, I don't know how they got away with it either.

They also changed Eric's surname from 'Wimp' to 'Twinge'. This was a change too far for me. Thankfully, he remained a Wimp within the pages of the comic.

When the Nutty folded in 1985, Bananaman survived and continued to appear in the Dandy. Of course, the Dandy itself would cease to be in 2012, but shortly before that happened, he also began to appear in the Beano, which is where he remains to this day. It seems you just can't keep a good banana down, (or something).

So, there I was, in March this year, looking around online for stuff to use as reference for those drawings at the top of this blog post, when the news hits...

There's going to be Bananaman The Movie!

...and today, I'm in the process of putting together said blog entry, when the teaser poster appears... 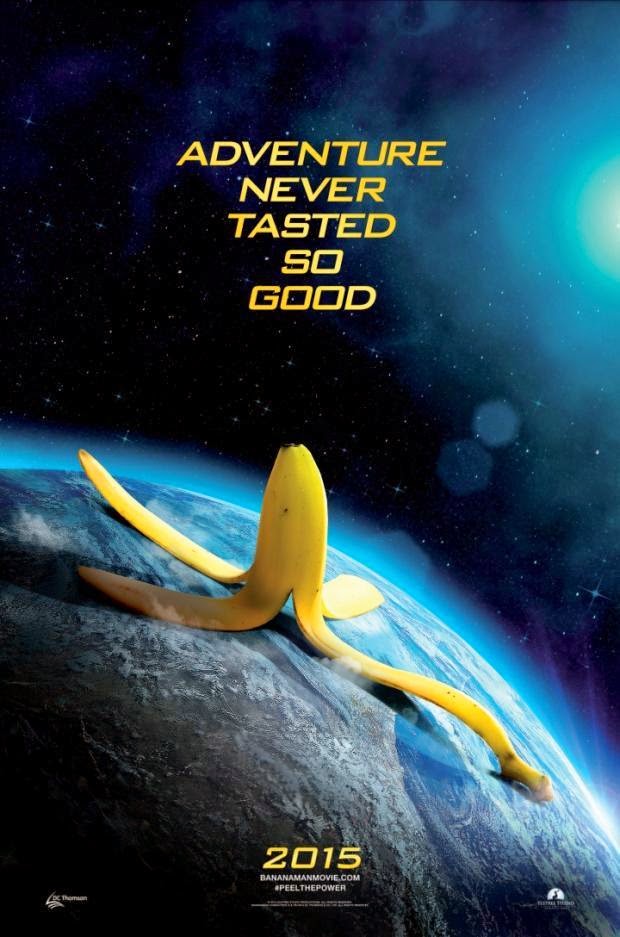 Poster spotted at Down The Tubes

Gadzooks!  Looks as if I may have to go to the pictures next year. I hope his name's still Wimp.

Anyone fancy a banana?
Posted by Malcolm Kirk at 16:35