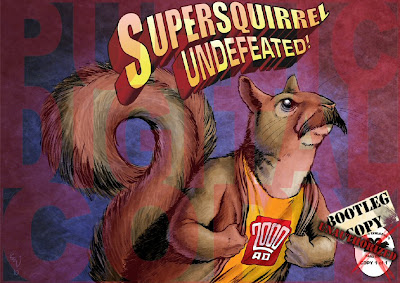 Carlos Ezquerra is best known as the man who designed Judge Dredd. He's drawn other stuff too... Strontium Dog, obviously, Major Eazy, Al's Baby, Third World War, Fiends of The Eastern Front... loads basically, and he was there right at the inception of most of that other stuff too. He doesn't just draw, he helps create worlds.

33 years later, Dredd's uniform remains pretty much unchanged and Carlos's work still appears in the pages of 2000AD, and neither has dated.

Earlier this year, Carlos had to have a lung removed because of cancer.

The news of this came first from Dredd writer and fellow co-creator, John Wagner, and then from Carlos himself, who wasn't letting a bit of lung-removal stop him from posting comments on the internet.

It was at this point that Mark "The Legendary Shark" Howard, a longtime fan and frequenter of the 2000AD Online messageboard, began to formulate a plan - Carlos had been drawing comics for us lot for over 3 decades, so maybe it was time we returned the favour.

So, Mark started getting in touch with people and making vague references to a "secret project" .

2000AD fans, being a curious bunch, (in more ways than one), quickly responded by emailing him to find out what he was up to.

It was a Get Well Soon Card, which was actually a comic, which was also a way of letting Senor Ezquerra know how much his work is appreciated by both his fans and contemporaries alike.

To cut a long story short, Carlos Ezquerra now owns the only existing physical copy of Supersquirrel Undefeated on the planet, but you can download a (watermarked) pdf version by clicking on the links below, (file size is 56mb & second link works best for me)...

...and if you'd like to donate a small, (or large), amount to the cancer charity of your choice, that would be appreciated.