I recently had a go at creating a comic strip adaptation of a film in six panels for Little White Lies magazine's Kick Ass Creative Brief.

The rules stipulated that the story be in black and white, had to conform to the template of panels provided and must be pretty much coherent to anyone unfamiliar with the film on which it was based.

I went with Planet of The Apes and here it is. 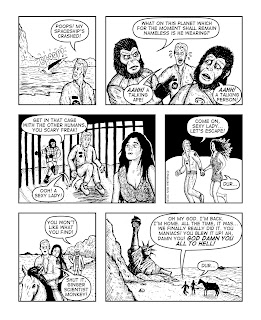 You can see the winner and some examples by other people here :

http://www.littlewhitelies.co.uk/blog/lwlies-issue-28-creative-brief-update/
Posted by Malcolm Kirk at 00:04