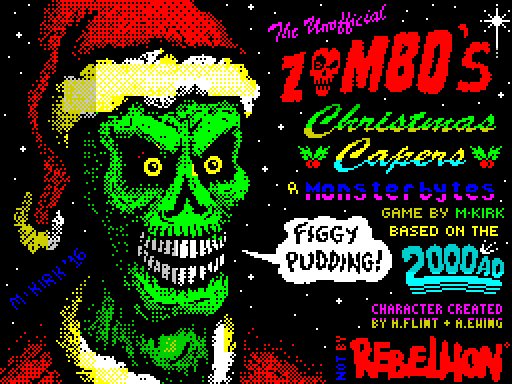 He's back, and this time it's Christmas! Zombo returns in this brand new completely unofficial game for the Sinclair ZX Spectrum! Now featuring 76% less game-breaking bugs than the first game in the series!

What's that you say? You can't be bothered fiddling with emulators? Now you don't have to, as it comes bundled with a version that'll run on your PC without having to set anything up! 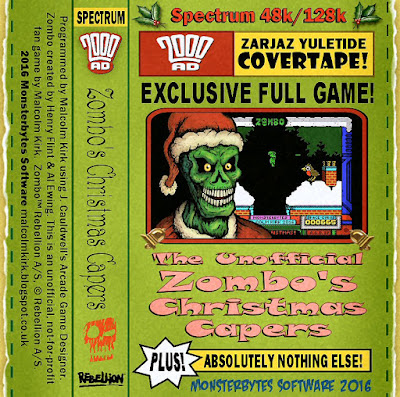 Centuries of overwork and stress have finally taken their toll - Santa™ has suffered a psychotic break and gone missing from his workshop in North Renfrewshire. The Government™ have tasked Zombo™ with tracking down Mr. Claus™ and retrieving the gifts for all the good little boys and girls™. Luckily, the naughty list is rather long these days, so he only needs to find a total of six presents. 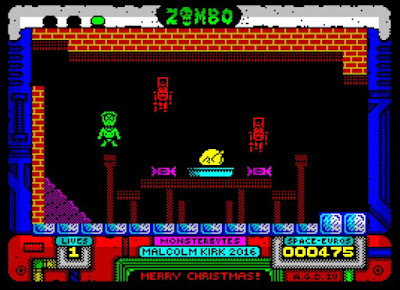 You must retrieve 6 presents and defeat the end of game baddy to win. Colour coded keys are scattered around, as are several other items, some of which are useful, others of which are not, but there's a Shootybang 2000™ somewhere which'll probably come in handy, (please bear in mind that the Shootybang 2000™ can only fire horizontally).

Zip file includes the instructions and mock inlay shown above, tzx, tap, z80 and sna files, PLUS a version you can run straight away without setting anything up! Just extract the files, click on "Zombo's Xmas Capers.bat", (or "Capers.exe" in the 'PC' folder), and you'll be up and running. You can even use your favourite control pad by selecting 'Kempston' from the options. However, please note that this version does away with the loader, (but if you want to see what that looks like, click here).

But that's not all! I've also updated the original Zombo game to include a new Mint Choc Chip flavour! What's that I hear you say again, (thus confirming I'm either psychic, insane, or have surreptitiously bugged your home)? What the hell am I talking about? I'll tell you what the hell I'm talking about... It now comes with a built in emulator just like Christmas Capers, and the 'teleportation' bug feature has been removed for ease of play. How d'ya like them artichokes?

The original Vanilla version is also still there for the masochistic among you.

Created in conjunction with the 2000AD MESSAGEBOARD ADVENT CALENDAR 2016™.
Posted by Malcolm Kirk at 01:51